I was out camping with the family in South Dakota's gorgeous Black Hills. I got a few chances to shoot pictures. This is a high-res composite I shot at sunset along the Needles highway in highly recommended Custer State Park. This is a composite of 2 sets of 9 images. A (virtual) 2-stop grad ND is employed around the mountain range using a simple gradient mask. I'll post some more images when I get to it. This image can also be found on flickr, where you can do the social networking thing.

EDIT: here is a second version of this image that I shot a few minutes before the above one. The composition is more tight and the light was slightly better. Posted by Jao van de Lagemaat at 1:35 AM No comments:

In a very strange twist of irony Amazon deletes all copies of Orwell's 1984 and animal farm from people's Kindles even though the "owners" paid for their copies. Quite outrageous! Of course this is in a way also poetic.
Posted by Jao van de Lagemaat at 5:10 PM No comments:

Amount of carbon dioxide emitted by an Apollo launch 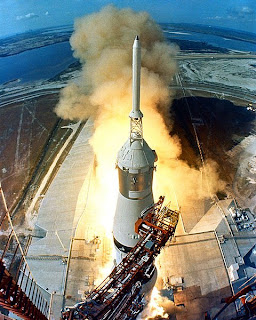 Looking at the size of the Saturn V, the most powerful machine ever created, one cannot help but wonder how much atmospheric CO2 would have been generated by a single Apollo launch. Intuitively, one would say it would have to be enormous. However intuition is often wrong as I will show below. This is an easy calculation to make. Only the first stage of this rocket used a carbon containing fuel: RP-1. The tank contained 770,000 liters of the stuff, which corresponds to about 700,000 kg. Since RP-1 is mostly aliphatic carbohydrates, one can assume the ratio of carbon to hydrogen to be about that of CH2, leading to the realization that burning all that fuel leads to the creation of 50 megamoles of CO2 - wow! or about 1.1 million cubic meters, about the volume of a cube 100 meters on all sides. In weight this is about 2.2 million kilograms, or in the parlance used to compare CO2 emissions, 2.2 kilotonnes.

Now we should place that in perspective. The US generates 5.9 gigatonnes of CO2 each year which comes down to about 20 tonnes per person per year. So a single Apollo launch generated about 1/3 of 1 millionth of the current annual production of CO2 by the US or the total yearly emission associated with 110 people. Much more of course in 1969 units. In the calculation, I neglected to mention the CO2 generated to produce the liquid hydrogen for the second and third stages. This would maybe double the amount of CO2 produced depending on the process used to make LH2 but I'll ignore it for now as it doesn't significantly change the conclusion. In other units, the 2.2 kilotonnes is about the CO2 production of 400 typical US cars/year (or about 1000 Priuses ;-) ). In more modern units, it is the amount of CO2 produced to charge about 360 million iPods - close to the total number of iPods ever produced. So if we get every iPod/iPhone/iPod touch owner to not charge their iPod(s) a few times where they normally would have, we'll have made up for the CO2 produced by firing the rockets for the Apollo missions.

I hope I didn't make too many order of magnitude errors here ;-) I just wrote it out on the back of an envelope. I wonder whether the firing of the rockets actually weighed up against all the other activity around the program such as flying the astronauts around the world for training and all the buildings and other stuff they did to make the missions possible. Perhaps not.

The image above came from wikipedia where you can find a much larger version.
Posted by Jao van de Lagemaat at 12:51 PM No comments:

Like any geek I was obsessed with space and the moonlandings when I was a kid. This month the 40th anniversary of the Apollo 11 moonlanding is celebrated. There is a fantastic gallery of images at the Big picture. Check it out.
Posted by Jao van de Lagemaat at 9:27 PM No comments:

Am I nuts or did Firefox 3.5 release break their color management? It no longer passes the icc test whereas Firefox 3.0 with the secret setting would perfectly. It also no longer grabs my monitor profile where 3.0 would correctly! What is going on here? If this is true than Firefox messed up in a major fashion! 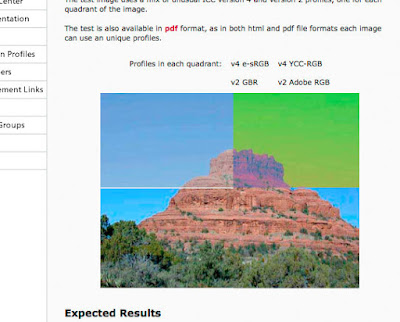 There is a nice essay by superb photographer David Ward on the creative process of photography. Highly recommended.
Posted by Jao van de Lagemaat at 9:44 AM No comments:

We spent the evening with friends and watched the fireworks from the neighborhood park. Being the photo geek that I am, I had to take camera and tripod. So here is a nice gallery of some images from the show (click on the image). Enjoy! For those who don't know, photographing fireworks is quite easy. You just need to dial in an aperture of 8 to 16 or so at low ISO (200 or lower) and open the lens for a few seconds, the time depending on how long you want the streaks to be. Focus your lens on infinity (an easy way is to focus on the moon) and shoot away.
Posted by Jao van de Lagemaat at 9:03 AM No comments:

Email ThisBlogThis!Share to TwitterShare to FacebookShare to Pinterest
Labels: 4th of July, fireworks

I would love one of those new 39 MP Hasselblad digital backs. In the mean time in the real world, here is a stitch of the waterfall I showed last time in square format. The image is 27 MP. You can click for a larger version, or go to its flickr page. Prints of this can go man high while retaining sharpness. There is a Black and white version here.
Posted by Jao van de Lagemaat at 4:46 PM 1 comment: