I spent a small amount of time up in the mountains this weekend and found a little stream to photograph. There is still a lot of green high up, so the peak hasn't been fully reached yet. There will be lots of opportunities still I am sure. (black and white conversion here)
Flickr link
I also made a horizontal version of the latter, which I think looks really nice: As always, these are very high resolution composites of multiple images. My logo will not show up in prints of these images.
Posted by Jao van de Lagemaat at 11:01 AM No comments:

Prelinks before the post:
Last Saturday, I finally was able to get myself out of bed at an ungodly hour of 2 am in order to photograph the sunrise at Chasm Lake. I had been planning to do this for a long time and my research showed that the light was still good, but wouldn't be for very long anymore. Chasm Lake is at the foot of Longs Peak (yes no apostrophe) in Rocky Mountain National Park. I remembered vaguely that it was a good distance hike as I had done it several times before and I had looked around for hiking times. One guide book and a web page mentioned about 3h20m for the 4.2 mile hike, which seemed long to me, but perhaps the altitude makes it more difficult. So I got up at 2 am, turned on the coffee machine and got dressed and hopped into he car hoping that the coffee would keep me awake. It was more the blaring car stereo that did it though. I got at the trailhead parking (which was almost full already as is normal on the weekend) at around 3:30 am, and started hiking at 3:45. Since the sun was going to rise around 6:46, which I knew owing to the GPS and to checking the location in the excellent TPE app programmed by fellow Colorado photographer Stephen Trainor, I thought I'd better hurry if I want to catch the predawn glow. Along the trail which is initially mostly in the forest, I passed many very friendly folks (it's a strangely social event going up this trail around 4 am because of all the people attempting to summit Longs). Up above the treeline, the starry sky was spectacular (moonless night) and I could clearly see the Denver metropolitan area. I scrambled the last few boulders and saw the lake and Longs' diamond face before me. However, it was still very dark. I checked my watch and it was only 5:30 am, still over an hour to go and apparently if you're motivated, 3h20m turns into only 1h45m, giving me plenty of time to check out some locations. I chatted a little with some very cold climbers that had bivouacked there and found some locations right next to the water and waited for the sun to come up.

Waiting for the sun to come, I tried to make some star trail images realized that I did not bring a remote release. This oversight stops one's ability to make bulb exposures so I had to work around this by combining multiple 30 second exposures, with the result that the star trails look like morse code. Next time better I guess. The star trails are more easily visible in the image when you click on it. Shortly before day break, the sky and mountains started glowing beautifully purple. The image below was taken 20 minutes before sunrise using a 13 second exposure. Ten minutes later I generated the following high-resolution composite on which you can see the lake more fully as well as the lake shore. At about 6:46 am this is what it looked like. The mountain was suddenly on fire and the glow contained oranges, reds, and magentas and even bright yellow in the vertical ledge in the middle: A more close-up view is here: After about 5 minutes, suddenly the sun disappeared behind a hazy layer for a few minutes and the light turned sullen grey. I was afraid that the good light would be gone already after only a few (but intense) minutes. Here is a link to an image during this grey period. However, this was by far not the end of it, and 5 minutes later, the sun came back with a vengeance. Now the mountain and the lake where bright yellow: There are some more colorful images on the smugmug gallery.

Looking over my shoulder I could see another photographer shooting further away from the lake but pointing in the same direction (I wonder why?). I wanted to go meet him/her but he/she was already gone when I was ready to move on. So I decided to continue my journey along the north side of the lake towards the bottom of the diamond. This was a hard scramble over a large boulder field, some traversing along a big slab and following a snow field with a deep chasm on the side up. Finally on the tip of a moraine, I took some images looking straight up at Longs using extreme wide angles. Here is a good example: Amazing that people climb this. I have quite a few friends who have done it, but I can't imagine what it is like not being a technical climber. I could see some climbers going up and if you look at the full res (60 MP+) version of my images you can see people. More clearly could I see climbers going up Lamb's slide to the left: I had my breakfast up here and headed back. Talked to some climbers I met that were just coming up and snapped some images such as this of the lake and Ship's prow: Crossing the stream I came upon this view, which unfortunately I had not found before. I think this is the view to get at sunrise: I converted it to black and white here as I thought it quite dramatic. If you mouse over you can see the color version. The blue of the sky was extremely deep even without polarizers.

On the way down in the forest I noticed some turning Aspen: I think they provide a nice conclusion to the post.
Posted by Jao van de Lagemaat at 8:39 PM 2 comments:

The role mystery in landscape photography

There is a wonderful article on photography blog by David Ward where he talks about "mystery" in landscape photography. He illustrates with some superb examples and identifies four different forms of mystery, namely scale, spatial ambiguity, lighting, and incongruity. Well worth a read. David makes fantastic imagery and his website is also well worth a check.
Posted by Jao van de Lagemaat at 12:12 PM No comments:

I've been playing with the CSS template for this blog in order to generate a clearer layout for the site. I wasn't happy with the optical separation between blog posts and the general fit and finish. As you can see, I now have a (more than) full-width top image and I changed some minor elements. This all looks fantastic on the browsers I have access to, namely Safari, Firefox, and Chrome but I do not know what it will look like in IE. I know that the drop shadows I added to the site title and other headers (which are CSS3 properties I understand) probably will not work in Internet Explorer, but they look very nice on the browsers that everybody should be using. Let me know what you think and also if you find any bugs in the layout. The screenshot below shows what it should look like. The framed image on the right will indeed cut off if you decrease the width of the browser window too much. Don't know yet how to solve that but this only arises when people have very low resolutions set on their displays. 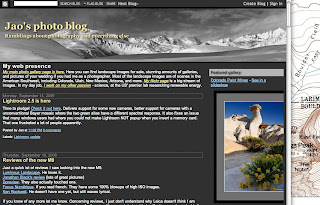 EDIT: should have gone for a Droste Cocoa can effect.
Posted by Jao van de Lagemaat at 10:02 AM No comments:

Time to pludge! Check it out here. Delivers support for some new cameras, better support for cameras with a unconventional Bayer mosaic where the two green sites have a different spectral response. It also fixes an issue that many windows users had where you could not make Lightroom NOT popup when you insert a memory card. That one frustrated a lot of people apparently.
Posted by Jao van de Lagemaat at 11:02 PM No comments:

Reviews of the new M9

Just a quick ist of reviews I saw looking into the new M9.
Luminous Landscape. He loves it.
Jonathan Slack's review (lots of great pictures)
Dpreview. They also actually touched one.
Focus Numérique. If you read french. They have some 100% blowups of high ISO images.
Ken Rockwell. He doesn't have one yet, but still waxes lyrical.

If you know of any more let me know. Concerning reviews, I just don't understand why Leica doesn't think I am worthy enough to test one ;-) . Of course, I am far from wealthy enough to be able to afford one, so I am decidedly out of the market. Still it is is nice to finally see a nicely simplistic, well designed, rangefinder camera with a full frame sensor.

EDIT: Another nice one here from David Farkas.
Posted by Jao van de Lagemaat at 10:50 AM 1 comment:

The web is abuzz with the (obviously not by accident) leaked specs for a new Leica camera called the M9. Apparently this will be a full frame rangefinder with 18 megapixels. I scoured the (adorned with very enjoyable Cuban street photography) pdf brochure and this looks likie a fantastic camera. If you're asking about the price you are decidedly not in the market for this thing. Expect it to cost as much as a D3x. Even though the brochure is clearly real, there are some strange things. This camera's native RAW format is DNG (hurrah Leica!!!) but Leica claims the format maintains the sensor's total 16 bits per channel? That makes no sense. No current photographic sensors have a 16 bit ADC and if they did, it would be utter overkill. There are simply not enough photons to make the signal-to-noise ratio low enough to warrant more than 14 or even 12 bits considering the pixel size on a 18 MP FF sensor. You're just more accurately imaging noise, which really doesn't help you with anything but create bigger files. Not even the D3 with far larger pixels needs 16 bits as 14 bits is already overkill simply because of basic physics. Anyway, the uncompressed DNG files are supposedly 36 MB, which is precisely right for a 16 bits capture on a 18 MP sensor. Concerning the DNG files, why is there no lossless compression that is standard in DNG (lossless jpeg), but only a gamma trick similar to the one Nikon uses in its lossy compressed NEFs? This seems strange to me. Lossy DNG compression is very much nonstandard and unnecessary as the lossless jpeg compression is just as efficient, but it is lossless. All in all, this is a very interesting camera, with some interesting technology. It is going to be very light and should be ideal for street photography and also landscapes. On the other hand, this thing is going to be extremely expensive. If you need the quality but cannot grok the premium price you'll pay for this Leica and don't mind a little extra volume and weight, consider a Canon 5D mk II or a Sony A850.
Posted by Jao van de Lagemaat at 8:22 PM 2 comments: